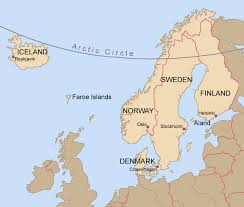 If you watch television, it is not uncommon to come across a television show based in a Nordic country.   Two recent popular television shows that come to mind are “Lilyhammer,” an original Netflix series set in Norway about a gangster who enters a witness protection program, and “Wallander,” a series on Amazon about the life of a Swedish policeman in a small town near the Baltic Sea.  You hear the dialects and you wonder.   Have you ever thought about the Nordic languages?

The Nordic Countries and Languages

(Credit: Creative Commons Nordic-countries.png by Maksim is licensed under
CC-BY-SA-3.0)

The Nordic countries are located in the northern most part of Europe stretching from the Atlantic Ocean to the Baltic Sea.   The principle countries are Denmark, Norway, Sweden, Finland, and Iceland.   Smaller territorial regions, such as the Faroe Islands and the Aland Island, as well as numerous tiny islands are also included in the Nordic area.

Although covering a vast territory, the Nordic countries are united through common language origins, cultural ties, and the common main religion of Lutheran Christianity.   The languages are grouped as the Germanic languages, which include Swedish, Danish, Norwegian, Icelandic, and Faroese, and the languages of Finnish, Sami, and Greenlandic are non-Germanic languages.

According to an article in CNN Money Online (See “The Hottest Job Skill is…” money.cnn.com/2013/10/30/news/economy/job–skills-foreign-language), translator/interpreter positions are in high demand.  The Department of Labor supports this trend, predicting a 29% growth from 2014 – 2024 in this sector.   Among the highest paying translator/interpreter positions in the private sector are those utilizing Nordic languages.   The high demand for translators/interpreters is due to the economic strength of the Nordic region.

Opportunities to study Nordic languages in the United States are abundant, particularly in the Midwest and West, where large numbers of people of Nordic descent reside.   Several of these institutions are located in Minnesota:   Augsburg College, Concordia College, and St. Olaf College.  Others are located on the West Coast, such as Pacific Lutheran University in Washington state and California Lutheran University in California.  Many more programs of study can be found through Internet exploration.

For those who prefer a more casual approach to Nordic language study, the free website/app https://www.duolingo.com/ offers multiple opportunities.   For English speakers, lessons are available in Swedish, Danish, and Norwegian.

Whether you would like to understand the Nordic languages spoken in your favorite television programs or want to pursue a well-paying career as a translator/interpreter of Nordic languages, opportunities abound!   Which language will you learn first?