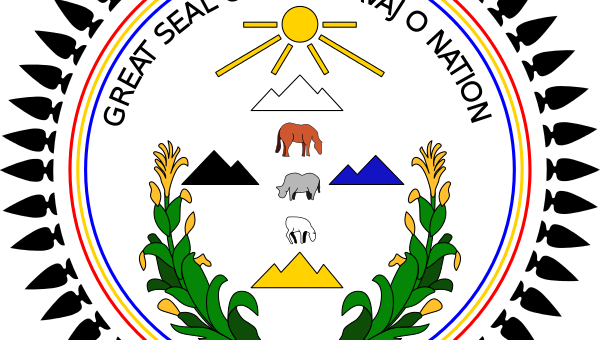 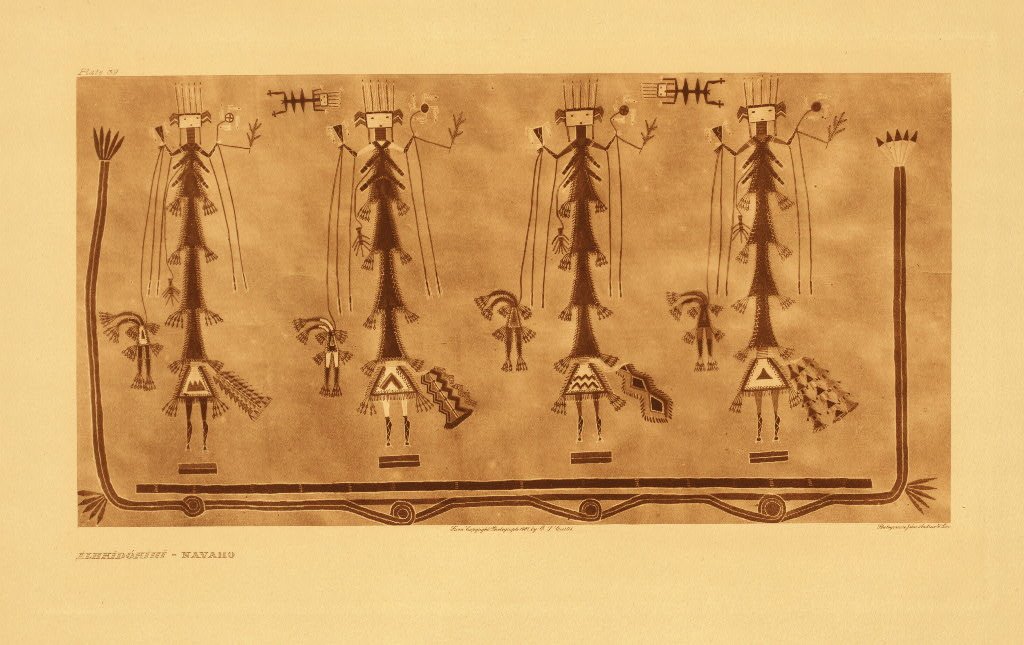 The Navajo language is the most spoken Native-American language in our country. Most of its speakers reside in New Mexico, Arizona, and Utah, with a large percentage of the Navajo living on a designated reservation known as the Navajo Nation. The Navajo Nation is the largest community of Native-American language speakers, and its total population of 200,000 ranks the Navajos as the second largest Native tribe in the United States after the Cherokee. (Source: https://lmp.ucla.edu/Profile.aspx?menu=004&LangID=4 ) 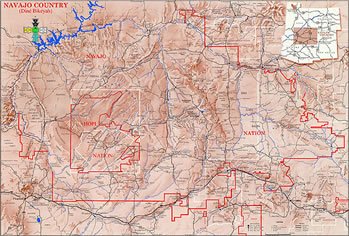 Located in portions of Northeastern Arizona, Southeastern Utah and Northwestern New Mexico, the Navajo Nation forms a square in the corners of these three states and covers a territory of more than 27, 000 square miles. The Navajo Nation is the largest land-area reservation maintained by a United States Native tribe. (Source: https://www.navajo-nsn.gov/history.htm )
The Navajo Nation. By Seb az86556 (Own work) [CC BY-SA 3.0 (https://creativecommons.org/licenses/by-sa/3.0) or GFDL (https://www.gnu.org/copyleft/fdl.html)], via Wikimedia Commons

Map of the Navajo Nation

Formed in 1990, the representative government of the Navajo Nation consists of an executive office, legislative house, and a judicial system. In addition, the Nation also has its own educational system, including two higher educational institutions: Dine College, a community college with local, regional and national accreditations and a technical college, Navajo Technical University. (https://en.wikipedia.org/wiki/Navajo_Nation )
Further, the Navajo Nation has its symbols of unity and solidarity.

By Himasaram [Public domain], via Wikimedia Commons.
Designed by Jay R. Degroat, a Navajo university student, the flag was the winning design chosen from 140 entries in a national flag competion. The flag was adapted a symbol of national unity in 1968. (Source: https://en.wikipedia.org/wiki/Flag_of_the_Navajo_Nation ) 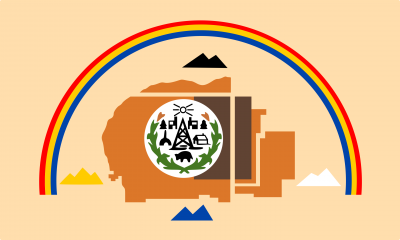 By Bassoonstuff (Bobby C. Hawkins) (Own work) [CC BY-SA 3.0 (https://creativecommons.org/licenses/by-sa/3.0)], via Wikimedia Commons
The Navajo Great Seal was designed by John Claw, Jr. and adopted as a national symbol in 1952. The Navajo Nation and that which sustains it (sun, crops, animals, and mountains) are in the center surrounded by 50 arrows (amended from 48 arrows in the original version) representing each state of the United States.
(Source: https://www.lapahie.com/Navajo_Seal.cfm )
Great Seal of Navajo Nation

Part of the Na-Dené family, the Navajo language is related to languages spoken across the western areas of North America. A nasal and tonal language, Navajo has four basic vowel sounds. The basic word order is subject-object-verb. (Source: https://en.wikipedia.org/wiki/Navajo_language )
Many scholars believe that the ancestors of the Navajos migrated from northern Canada around the year 1000 AD. By the 1500s, the Navajos had settled permanently in areas of New Mexico, Arizona, and Utah.
(Source: https://historytogo.utah.gov/utah_chapters/american_indians/navajoindians.html )
There are two possible origins for the word “Navajo,” representing both the people and the language. The Spanish called the language and people “Apaches de Nabajo” because of the linguistic similarities between the Navajo and Apache languages. The second theory attributes the Tewa Indian word “Navahuu” meaning “field and wide valley” as the origin of the Navajo name.
(Source: https://lmp.ucla.edu/Profile.aspx?menu=004&LangID=4).
Native American languages have an oral tradition before the arrival of the Europeans. With the exception of the Mayas and their neighboring tribes on the Yucatan Peninsula, no native tribes had writing systems. (Source: https://www.cogsci.indiana.edu/farg/rehling/nativeAm/ling.html ) Efforts to introduce a compatible written system to the Navajo oral traditions began in the 19th century. Earliest endeavors to devise a written system were initiated by the military with Lieutenant James H. Simpson producing a list of 40 Navajo words and publishing them in a military journal in 1849. Other documents include a vocabulary list of 400 Navajo words recorded by Captain Eton in 1856 and in the following year more words in Navajo referred to as the Pino vocabulary were recorded.
(Source: https://www.languagesgulper.com/eng/Navajo.html) and https://www.omniglot.com/writing/navajo.htm )
In the early 20th century missionaries produced religious texts, dictionaries and grammar texts in Navajo. Although these texts used the Latin language alphabet, each group determined its own spelling system. In 1912, the Franciscans published a “Vocabulary of the Navajo Language – a two volume Navajo-English/English-Navajo dictionary. However, in 1939, a standardized spelling system was developed with the publication of a Navajo/English dictionary by authors Morgan and Young. In the 1940s numerous written materials, children’s books, a modern dictionary, and newsletters, were published in Navajo. (Source: https://www.omniglot.com/writing/navajo.htm )

The Navajo Code Talkers
The Navajo Indians played a significant role in World War II. They are credited with assisting the United States with victories in the Pacific.
Use of the Navajo language in US military operations was inspired by Philip Johnston, a World War I veteran and son of Navajo missionaries. Raised on a Navajo reservation, he spoke fluent Navajo. At that time very few non-natives spoke or understood the Navajo language. Because the Navajo language is known by so few non-natives and is a difficult language to learn, Johnston suggested that language be used as a code in military operations. Recognizing that Navajo in codes would be difficult to decipher by the enemy, the United States Marine Corps enlisted 29 Navajo men as radio operators in 1942. Between the years 1942 and 1945, an additional 400 Navajo men were trained in this capacity.

These enlistees developed a dictionary and created numerous words for military maneuvers. During training, they memorized all of the words, and encoded, transmitted, and decoded messages within 20 seconds without the use of machines. The Navajo assistance was far-reaching; the Code Talkers took part in all assaults conducted by the US troops in the Pacific and served in all six marine divisions. The Japanese were unable to decode their messages, and the Navajo system remained classified until 1968, at which time the Navajo Code Talkers Dictionary was released to the public.
(Sources: https://www.discovernavajo.com/navajo-culture-and-history.aspx and https://www.nativevillage.org/Inspiration-/Navajo%20Code%20TAlkers%20Dictionary.htm )
In 1992, the Pentagon opened an exhibit honoring the role of the Code Talkers in World War II. The surviving 300 Code Talkers were awarded Congressional Silver Medals and the original 29 Code Talkers were given Congressional Gold Medals.

The State of the Language
Use of Navajo was discouraged by the dominant American culture surrounding the Navajo lands. The educational systems in the first part of the 20th century required instruction in English, and many Navajos were sent to boarding schools to learn the English language and the American culture. Additionally, economic reasons forced many Navajos to focus on English to communicate. (Source: https://lmp.ucla.edu/Profile.aspx?menu=004&LangID=4 )
In the 1980s efforts were made to revive the language. A Grammar and Colloquial Dictionary was published in 1980 and expanded in 1982. Further, Navajo schools determined that the Navajo language be available in all schools in the Navajo Nation. (Source: https://en.wikipedia.org/wiki/Navajo_language )
With declines in the number of Navajo speakers in the 21st Century, nationalist movements encourage native children to learn Navajo. In an historic agreement in 2016, The Obama Administration has encouraged more autonomy and decision making in the Navajo schools with regard to instruction with the partnership of the Bureau of Indian Education and the Department of Interior. Under this agreement, the Navajo schools received increased federal funding and the right to determine standards, accountability, and control over their schools.
(Source: https://indiancountrymedianetwork.com/news/politics/obama-administration-gives-historic-control-of-education-system-to-navajo-nation/ ) Ongoing and increased school efforts, such as early Navajo language instruction, introduce the Navajo language to the very young.
Technology may be an answer in the resuscitation efforts. Linking the Navajo language instruction to technology may engage youth in learning the language. New games, such as the Navajo Toddler, created by Israel Shortman, a member of the Navajo Nation, provide interactive and instructional games in the language via smartphones. Young children learn language basics in food, numbers, and body parts. He plans to develop more interactive language games for Navajo youth. (Source: https://www.salon.com/2016/10/01/native-apps-how-digital-technology-is-helping-to-preserve-fading-native-american-languages/ )
The Navajo Language Renaissance, consisting of a group of linguists, educators, and other language enthusiasts, is a non-profit organization that seeks to spread the Navajo language through Rosetta Stone software. The group hopes to bridge the gap among generations so that grandparents, parents, and children can all communicate in Navajo.
(Source: https://navajorenaissance.org/ )
Similarly, mobile phone usage appeals to many youth and may help preserve the language. Some adolescents are improving their language skills by texting to each other in Navajo.
(Source: https://www.communicaid.com/business-language-courses/blog/why-are-languages-dying/ ) Knowledge of Navajo has become a political issue, as well. Some members of the Navajo Nation believe that elected officials should be fluent in Navajo.
(Source: https://indiancountrymedianetwork.com/news/politics/navajos-have-spoken-voters-will-set-fluency-requirement-for-top-leaders/ )
Steeped in rich traditions, the language has survived, despite its struggles, and remains a vital Native American language through the combined technological and educational and community efforts of the 21st century. The Great Seal of Navajo epitomizes the Navajo legacy: a vibrant and enduring language and culture with important linguistic and cultural contributions to the larger American society.