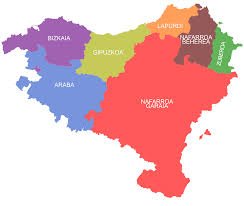 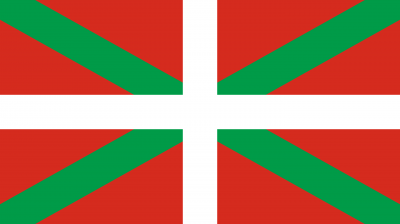 Flag of autonomous region of the Basque Country.   By Daniele Schirmo aka Frankie688 [CC BY-SA 2.5 (https://creativecommons.org/licenses/by-sa/2.5)], via Wikimedia Commons

An ancient legend tells the tale of a mythical land and its people.  Many years ago, a shepherd, seeking new land for his flock, came to an overflowing river.  On other side of the river, fertile lands awaited.   Desperate and unable to cross the river, the shepherd saw Lamia, a beautiful woman on the other side of the river.  He asked how he could join her in the rich land on which she sat.  She replied that if he could provide a name for the child whom she carried, he would be able to cross via a stone bridge.  If she did not like the name, the valley where he stood would overflow. Pondering her request, he recalled the name of his mother, who died giving birth to him.   Upon hearing the name of his beloved mother, Lamia provided the magical bridge for him to cross.

The child born to Lamia and named by the shepherd gave birth to seven children.  Each of her children founded a province – the land where future generations would reside.

The descendants of Lamia and the language they speak remain to this day shrouded in mystery.   They are the Basque people and they speak the mysterious language of Basque.   (Source:  https://www.youtube.com/watch?v=cXalxJ-1M38&t=129s )

Where is this mythical land located?

This mythical land, known as Basque Country, is a region located in the Pyrenees Mountain Range of Northern Spain and Southwestern France.  The region is densely forested and has a rocky terrain.

The people and the language they speak are of unknown origins.   Their traditions and language have remained largely unchanged over the centuries due to geographic and cultural isolations from other groups.

Many historians believe that the Basque people are descendants of farmers who arrived in this area about 6,000 years ago.     (Source:  https://www.youtube.com/watch?v=cXalxJ-1M38&t=129s )

Figure 1 By This file is licensed under the Creative Commons Attribution-Share Alike 3.0 Unported license.

What are the seven provinces of the Basque territory?

What language do the Basque people speak?

The people of this region may speak a dialect of the Basque language.  There are five main Basque dialects:  Bizkaian (Western Basque), Gipuzkoan (Central Basque), Upper Navarese, Navararro – Lapurdian, and Souletin in France.  However, since the 1960’s, the region has adopted a standardized language called Euskara Batua that serves to unify the region.  Eusakara Batua is used in official business and taught in the schools.   (source:  https://www.youtube.com/watch?v=S1l9oDiSiEQ )

What is the origin of the Basque Language?

The Basque language is a language isolate, which means that its origins are unknown and the language belongs to no known language family.   It is believed to be the oldest surviving language in Western Europe.  (Source:  https://en.wikipedia.org/wiki/Basque_language )

Other historians believe that the Basque language developed during the Neolithic Age or perhaps earlier. Further, most of the existing European cave art has been found in this region, leading some to conclude that Basque could be “the seeds of articulate language.”   (Source:   https://www.bizkaiatalent.eus/en/pais-vasco-te-espera/senas-de-identidad/euskera-antigua-europa/ )

Still others, such as renowned German linguist Theo Vennemann, believe that Basque is the only survivor of a group of related dialects in Europe. (Source:  https://www.bizkaiatalent.eus/en/pais-vasco-te-espera/senas-de-identidad/euskera-antigua-europa/ )

A definitive answer as to the origins of the Basque language continues to elude linguists and historians.

What is the status of Basque in the Present Day?

For centuries, the Basque language was influenced and change little by outside groups.

In the 20th century, Basque became a minority language with many speakers moving from rural areas to cities.  While migration of the Basques to other locations did occur during the 20th century, interestingly, the Basque sought separatist and isolationist movements against the influence of outside groups, particularly the country of Spain.  (Source:  https://www.omniglot.com/writing/basque.htm )

Francisco Franco, the Spanish dictator who ruled from 1936 to 1976 in Spain sought to diminish the efforts of a Basque unification of separatist movement.   During his reign, he allowed no use of the language in schools or official business.

However, in the 1960s, the Royal Basque Language Academy standardized the language, thus beginning a movement to teach and to popularize the use of the Basque again.  About 900,000 speak Basque, with about 37 percent of the Basque Community in Spain and approximately one third of the population in the French territory. (Source:  https://www.npld.eu/about-us/basque/ )

In the 21st century, the use of Basque as a primary language continues to grow.   It is predicted that six out of ten Basques will speak the language by 2036.  Thirty percent of the Basque citizens will use Basque as a first language at that time.  (Source:  https://www.bizkaiatalent.eus/en/pais-vasco-te-espera/senas-de-identidad/euskera-antigua-europa/ )

Where is the Largest Community of Basque Speakers Outside of Europe?

The largest communities of Basque speakers outside of Europe reside in the United States.

Idaho has a sizeable community of people of Basque origins dating back to the mining quest of the late 19th century in the American West.  With limited economic resources the late 1890’s, many Basques immigrated to the United States, seeking gold and silver mining opportunities in Idaho.   Many established homes in communities surrounding Boise and eventually became ranchers and sheepherders.

As the early groups of Basque migrants prospered, they sent for their families in Europe, spurring a second migration of Basque immigrants to this region in the early 1900s.   To date, the descendants of the original Basque settlers, maintain a strong community of traditions and of their language in Boise.   They also host festivals and boast an impressive museum and culture center of the Basque heritage in Boise.  Boise State University also has a renowned Basque Studies Program.

For those seeking to learn a mysterious and beautiful language, choose Basque!