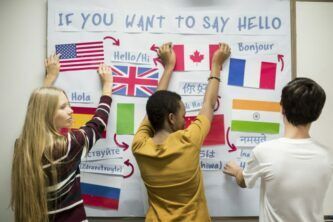 Over the past several decades, the Northern Virginia area – part of the Greater Washington, DC Metropolitan Region – has quickly become one of the most ethnically and linguistically diverse regions of the country, and as such, has an increasing demand for translation and interpretation services to support local Limited English Proficient (LEP) communities. Traditionally, the Northern Virginia area includes Arlington, Fairfax, Fauquier, Loudoun, Prince William, and Stafford counties, as well as the independent cities of Alexandria, Fairfax, Falls Church, Manassas, and Manassas Park, and boasts a population of more than 3.1 million. Northern Virginia has also accounted for roughly 40% of the entire state’s growth over the past decade, according to the Washington Post.

The immigration boom in Northern Virginia began in the 1980s, partially as a result of events abroad, such as the civil war in El Salvador and the Soviet invasion of Afghanistan, among other factors. New immigrants from all over the world continue to settle in the area because of the quality of education, the prevalence of jobs in the technology, government, and other high-skill sectors, and to join already well-established communities from their homelands.

In the past ten years alone, the Hispanic/Latino population in Virginia has more than doubled, to nearly 650,000, with many of the largest Hispanic/Latino communities located in the Northern Virginia area. These include large communities of immigrants (and their descendants) from El Salvador, Peru, Cuba, Bolivia, Mexico, Colombia, and Chile. Arlington also happens to be the center of the largest Bolivian American community in North America.

In addition to the large and continually growing Spanish-speaking communities in Northern Virginia, large groups of Asian immigrants have also settled in the area, including Korean, Vietnamese, Chinese, and Indian communities. For example, Fairfax County serves as the de facto center of the Korean community in Virginia, accounting for more than 60% of the Korean-Americans in the state. And, in Loudoun County, the Indian immigrant community has grown by roughly 750% over the past decade and now accounts for more than 50% of the Asian population in the county.

Other significant groups of immigrants (and their descendants) have come from Uzbekistan, Russia, the Middle East, Afghanistan, Ethiopia, Iran, Thailand, and Pakistan. There is even a sizeable community of Tibetan refugees in the area. Not only have these groups brought their language and culture with them to their new home, but they have also brought their culinary traditions. Korean, Chinese, Vietnamese, Indian, and innumerable other types of authentic cuisine can be found throughout the Northern Virginia area. There are also dozens of cultural and community centers that advocate for their communities and work hard to share their cultural and linguistic traditions with others.

With the rapid growth of the immigrant communities over the past two decades and an influx of new residents with Limited English Proficient (LEP), local governments have risen to the challenge by enacting some of the most progressive language access programs in the country. This allows equal access to information and services from the government in many languages, including Spanish, Korean, Vietnamese, Chinese, French, German, Tagalog, Arabic, Russian, Farsi, and more. Residents can access interpreters to assist in communicating with the public schools, to access health services and legal aid, and much more. Additionally, most vital government and public school documents and information are available in multiple languages.

Through our contracts with numerous local government entities in the Northern Virginia area, as well as our relationships with local immigrant communities, PGLS plays in an important role in ensuring high-quality language services in the Greater Washington Metropolitan Area. Specifically, we regularly provide translation and interpreting services in Spanish, Korean, Chinese, Vietnamese, French, Farsi (Persian), Amharic, and numerous other languages in Northern Virginia, Washington, DC, and Montgomery County (Maryland), both for government agencies and for local businesses who are looking to expand their outreach to new non-English speaking markets.