How do we communicate our message? For some, it is through the spoken word. But for others who cannot rely on the sense of hearing to communicate with others, alternative methods have been created. Visual symbols deliver messages for many. For the deaf and hard of hearing, their families, and communities, sign language may be the means by which they exchange information.

In the United States and many parts of Canada, American Sign Language (ASL) has become the predominant language of communication for the deaf and the hard of hearing. The United States has a significant deaf population with more than 22 million people who are deaf or hard of hearing. (See “Deaf Interesting Facts.” https://signinterpretingservices.com/deaf-interesting-facts.htm ). The ASL spoken by many members of the deaf community has evolved over the past 200 years into a communicative method that has acquired its own separate language identity.

Brief History of ASL
Many factors influenced the development of ASL in the United States. A strong need for some alternative form of communication arose in communities with large numbers of deaf or hard of hearing citizens, particularly in the northeastern part of the United States. A minister, concerned with educating his deaf daughter, sought the assistance of Thomas Hopkins Gallaudet. Gallaudet went to Europe, seeking instruction on how to educate deaf children. He received much of training in sign language in Europe, and with the assistance of Laurent Clerc, brought sign language instruction to the United States. Together, Gallaudet and Clerc opened The American Asylum for the Deaf and Dumb in 1817. The school, now known as The American School for the Deaf, continues its mission to provide deaf children with a quality education. Today, numerous schools for the deaf flourish throughout the United States, as well as Gallaudet University, an internationally-prominent institution of higher education in Washington D.C., educating primarily deaf and hard of hearing students.

ASL evolved from the innovative methods of these two pioneers. Influenced heavily by French Sign Language, ASL also embodies the unique American experience, and now stands alone as a separate language spoken by North Americans. Other factors which may have influenced its style include: the North American tribes using a sign system to communicate with one another, individual community efforts throughout the emerging United States to assist their deaf and hard of hearing members, and a significant population of deaf people wanting to share a common language. (See “American Sign Language: History” https://www.signgenius.com/american-sign-language/american-sign-language-history.shtml )

In 1955 Professor William Stokoe of Gallaudet College began a tireless battle to have ASL recognized as its own language. Known by some as “The Father of Linguistics in the Field American Sign Language,” Stokoe ultimately succeeded in this endeavor. (See “A True Pioneer” https://gupress.gallaudet.edu/Stokoecompliments.html ).

ASL continues to grow in popularity as a foreign language studied in American secondary schools and universities. After Spanish and French, ASL is now the third most studied language by college students. (“See Most Studied Languages in the U.S.” https://www.infoplease.com/ipa/A0905275.html ) In their study, “Enrollments in Languages other than English in United States Institutions of High Education Fall 2013,” Goldberg, Looney, and Lusin (https://apps.mla.org/pdf/2013_enrollment_survey.pdf ) note the status of ASL as the third most studied language, but also reference that ASL had largest increase in enrollment of all language elections by college students between the years 2009 and 2013.

ASL Components
ASL is not English. ASL has its own grammar, syntax and culture. ASL has an alphabet consisting of 26 signs, but also has separate signs representing the majority of words found in written English. (See “American Sign Language: Quick Facts” https://www.signgenius.com/american-sign-language/american-sign-language-facts.shtml )

Below is a chart of the ASL Alphabet: 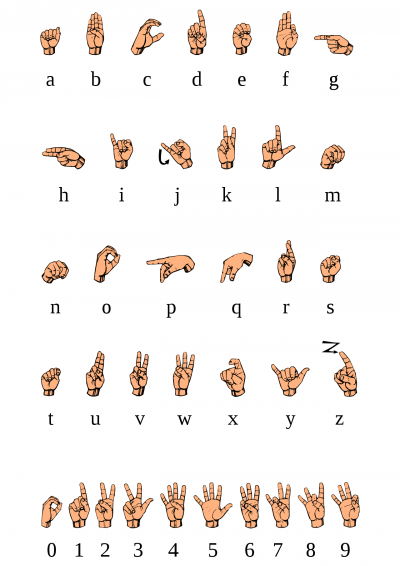 The message communicated by ASL signing is influenced by six factors in addition to the actual signing by hand. Variations and different movements and directions while using these other visual signs can signify different words, meanings, and usages. (See “American Sign Language: Quick Facts” https://www.signgenius.com/american-sign-language/american-sign-language-facts.shtml . These factors may include facial expression, body movement, hand shape, hand position, hand movement, and gestures.
ASL has a different sentence arrangement than that of the English sentence. For example a typical sentence in ASL may consist of the following ordering of words: Topic and then comment. In addition, ASL doesn’t use “to be” verbs. In English, we may say, “I am the teacher,” while in ASL the statement becomes “Me teacher,” or “I teacher.” (ASL Class Notes from taken by writer)
However, just as in English, ASL is affected by regional dialects, word usage by community, and community cultures. Both languages continue to evolve as used, experienced, and interpreted by their users.

Important Contributions by Deaf Community
As a community, the deaf population has made significant contributions to our culture. (See “Deaf Interesting Facts,” https://signinterpretingservices.com/deaf-interesting-facts.htm )
For example:

ASL is a wonderful, fluid, and graceful means of communication. Why not join the ranks of the increasing numbers of people who make their message understood through ASL?