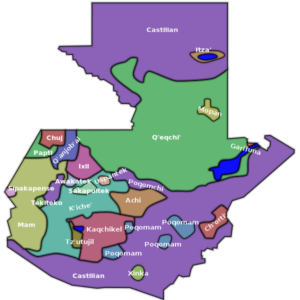 As a lifelong student of the Spanish language, I once remarked to my long-time Guatemalan teacher and friend, Pedro Lucas, Director of  the Centro Maya School of Languages, that the Guatemalan Spanish is clear and easy to understand compared to my experience with other dialects of the Spanish language during my travels and studies in other countries. Pedro replied that Guatemalan Spanish is so clear because, for many Guatemalans, Spanish is not their first language, so Spanish is learned, carefully, precisely, and methodically. As with the beautiful and vibrant tapestries for which Guatemala is known, Spanish is just one thread that unites the Guatemalan people, along with the many other threads of indigenous languages,  to form the  rich and cultural tapestry for which Guatemala is celebrated.

Creative Commons Indiomasmap Guatemala.svg is licensed under CCBY-SA3.0  This map illustratesthe diversity of languages spoken in Guatemala.  The purple areas represent Spanish (Castilian) and the other colors represent the other languages.

As with most other languages, the Mayan languages have evolved over time.  The earliest forms of the language were spoken and written forms developed later.   During the Classic Period of Mayan history (approximately 200 CE), early forms of writing were etched in hieroglyphics.    With the arrival of the Spanish conquistadores in the 16 and 17th centuries, Spanish became the dominant language.  Spanish influenced the Mayan languages by creating a Roman alphabet for many of the indigenous languages.   During the Modern period of the 20th century, a nationalist effort to  preserve the Mayan languages and cultures emerged.   In 1986, the Academia de Lenguajes Mayas de Guatemala became the governing body for preserving the Mayan languages and for developing a standard alphabet for the the languages.  Similarly, in 1996, the government allowed for bilingual translations of Spanish/Mayan Indigenous Language for some government documents and voting materials.

Do Spanish and the Mayan languages peacefully co-exist in the 21st century?   Yes and no.    The Mayan languages and Spanish have influenced each other profoundly over the years.  The Mayan languages have affected Spanish in terms of clear pronunciation, the slow, rhythmic delivery,  and the intonation of the language, thus producing a clear, understandable Spanish that is appreciated by so many second-language learners. In turn, Spanish has influenced the Mayan dialects with the introduction of new words from technology, medicine, and industry.

Unfortunately, the Mayan languages are accepted by fewer people today because many younger people have learned Spanish early in life, and Spanish is the means by which domestic and international business is conducted.    Also,  with the event of immigration from other countries, such as Nicaragua, Spanish has become the unifying language.   Sadly, many native Guatemalans do not want to speak the native, indigenous languages for fear of racial, cultural and linguistic discrimination.

According to “Ten Guatemalan Languages on the Verge of Extinction”   (See https://rootsandwingsintl.org/blog/2012/07/ten-guatemalan-languages-on-the-verge-of-extinction/) some Mayan languages are endangered.  However, efforts are being made to preserve the valuable Mayan languages through organizations that work with children and by Google through the Endangered Language Project.