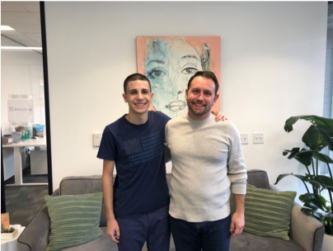 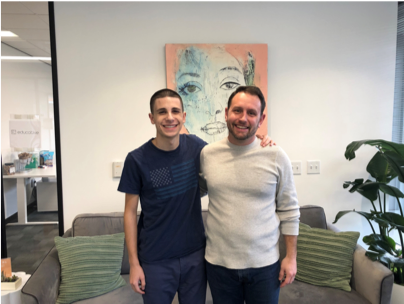 Gimkit partners Josh Feinsilber (L) and Jeff Osborne (R).Josh Feinsilber, a high school senior from Seattle, loves playing learning video games in his classes. He enjoys the educational games so much that last year he decided to create his own!

As part of a class project, he developed Gimkit. Applicable to almost every discipline, the game promotes strategic decision making and critical thinking skills. The lively and engaging classroom game can be used in many school courses, including foreign languages, to practice vocabulary and subject matter. Students compete against each other to top the leaderboard. In addition to receiving imaginary currency for correct responses, the players can strategize to increase their winnings with purchases made through Gimkit’s shopping feature. Feinsilber also added a team mode to balance the unequal amounts of currency earned by students in the individual matches.

Starting Small
Starting small, he sought ten teachers to test his game in their classrooms. Ultimately, his goal was to provide technology using real-time communication to create an educational game that both students and teachers loved. The game was an immediate success. Teachers spread the good news of Gimkit to their colleagues, and within one year, Gimkit was played by more than 700,000 students in classrooms across the nation! With Gimkit’s free version, teachers have limited access to create games known as kits, but for a modest cost, extensive opportunities exist to create unlimited kits or to search for already-made kits by other teachers. As a subscription service, Gimkit offers reasonable and flexible payment plans to teachers and schools who select this option.

Feinsilber appreciates the help he has received from the teaching community. “To this point,” he remarked, “Gimkit hasn’t done any paid advertising. All of our growth stemmed from teachers helping us spread the word, and we wouldn’t be here without them.”

As Feinsilber graduates in June 2019, he has made an important decision concerning his post-high school plans. He plans to forego university at this time and will focus fulltime on Gimkit.

A Promising Venture
Feinsilber has taken on a partner, Jeff Osborne, to help manage the growth and expansion of Gimkit. Osborne has been a long-term mentor and friend to Feinsilber. Feinsilber will continue with the product development and will create new and better tools to enhance Gimkit. Osborne will manage the business and financial aspects of operating Gimkit.

While the two partners are focusing right now on enhancing Gimkit and creating new revenue,  Feinsilber states that they may consider developing additional educational games in the future.  While the priority now is to produce new and improved versions of Gimkit, the future holds unlimited possibilities for this promising venture!

Feinsilber remains proud, stating that “Gimkit has shown me the importance of powerful education moments. Creating and running Gimkit has been the most educational experience I have ever had, and seeing students use this little game I made as a school project has shown me how awesome it feels to help students get more engaged in the classroom.”