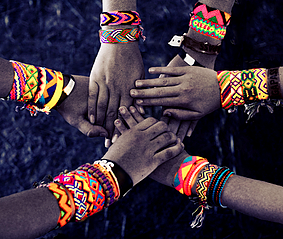 Every year, the Spanish Club at the small rural high school where I teach chooses a community service project. In addition to raising money for a good cause, students participate in and understand world social justice issues as 21st century global citizens.

This year, we selected the Pulsera Project, a 501(c) 3 charitable organization, dedicated to improving the lives of impoverished Nicaraguan artisans.

The Pulsera Project is a charitable organization devoted to helping Nicaraguan artisans improve their lives through the sale of their art.  As a member of the Fair Trade Federation (www.fairtradefederation.com), The Pulsera Project is dedicated to empowering and to treating with respect small business partners throughout the world. Since the non-profit’s inception in 2009, more than 2,000 schools in all 50 states have participated in Pulsera sales, selling more than 600,000 pulseras and generating nearly $4,000,000 in sales.

The Pulsera Project began in 2009 when a group of friends vacationed in Nicaragua during Winter Break in college.  Nicaragua provided perfect adventures in surfing, sailing and hiking. The group also explored the other side of Nicaragua, the one that tourists don’t often see: the rich culture of its people.

While discovering the natural beauty of Nicaragua, the friends met a group of artisans on a farm in the foothills of Managua. The artists made beautiful one- of- a- kind colorful bracelets and treated the visitors like long-lost

Two high school friends, Colin Crane and Chris Howell, worked with the Nicaraguans and the bracelet sales throughout college along with two other project co-founders, Colin’s parents, Sue Patterson and Chris Crane.  During this time, Colin and Chris H. learned to manage many aspects of the business. They developed successful marketing strategies, immersed themselves in the Nicaraguan culture through more country visits, and learned to speak Spanish well.

Three people work in the South Carolina office: Colin and Chris H. as co-directors of US Operations and Jillian Bonner who handles administrative details. The other project co-founders and members of the board of directors oversee general project administration.

Similarly, the other branch of the non-profit social enterprise is in Nicaragua. The project is managed by a Regional Director who leads the work of the five full-time employees and several part-time employees who participate in all aspects of the pulsera production: from meeting with the artists, to training them, and to helping them plan schedules and production.

At the center of The Pulsera Project are issues of Fair Trade and Global Citizenship.

The Pulsera artisans are treated holistically. Currently, there are approximately 180 fulltime and part-time artisans. The workers make fair wages for their work and can sustain a middle-class lifestyle in Nicaragua. All full-time workers are eligible to receive reimbursement for a large portion of their medical expenses and educational tuition assistance for a viable program of study. In addition, after a short employment period, they may be eligible to receive assistance in purchasing a home. Further, a portion of the proceeds help other human rights organizations in Nicaragua to improve the lives of its citizens.

The American students who sell the bracelets also learn about the Latin American cultures and the social justice issues of eliminating poverty, establishing fair and equitable wages for all workers, and becoming participants in a global society. Although they may learn about these concepts in social studies classes, the students practice and live these principles through participation in The Pulsera Project.

Bracelet Sales in the U.S.

Initially, the bracelets were sold through service organizations and fraternities. Now the bracelets are sold exclusively through school sales.  Each bracelet sells for $5.00 and contains a tag with the signature and picture of its maker. This tag supports the philosophy that behind every product is a human being who deserves decent working conditions and wages.

For more information on The Pulsera Project, visit https://www.pulseraproject.org/